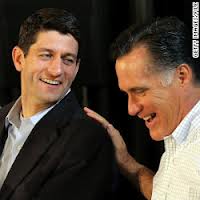 In his recent piece, Charles Krauthammer set out two approaches that Mitt Romney can take in his campaign against the president. Stewardship or ideology.  Krauthammer asserted that Romney would win with an ideology approach.  In a previous post, I wrote that Romney needs to be an architect, not a handy man; he needs to have a vision for the country, not just a pragmatic fix for it.

By picking Paul Ryan, Romney chose the vision/ideological approach.  This election presents us with a stark choice between two very different ideologies: Liberty vs. statism; individual wealth creation vs. “you didn’t build that”; America vs. Occupy.

The Ryan pick also demonstrates something about Romney that many conservatives doubted: he’s bold.

With Ryan, Romney did not choose an attack dog, or someone who can deliver a particular state.  He chose someone much more dangerous to the president’s reelection chances.  Paul Ryan is a policy wonk who can crunch the numbers and he’s also an articulate spokesman for liberty.  He knows in vivid detail what he’s talking about and he has the ability to present such knowledge in broad themes.  For a good example and analysis of this point, check out Steven Hayward’s opinion of Paul Ryan, in which Hayward compares Ryan’s ability to communicate ideas to that of the Great Communicator, Ronald Reagan.

Romney and Ryan make a great ticket.  I’ve previously written about my support for Romney, stating that he “has enjoyed great success as a businessman and investor in the private sector and he has experience as a successful executive in the public sector.”  Ryan makes a great addition because, aside from his above-mentioned abilities, he is everything the left wishes the president was, but is not: bright, wise, visionary, capable, inspiring, and uplifting.  The nice thing about setting the real thing next an imposter is that they both stand out.  The president’s suit never seemed so empty.

Again, this election is liberty vs. statism; individual wealth creation vs. “you didn’t build that”; America vs. Occupy.  It’s Romney/Ryan vs. Obama/Biden.  By choosing Ryan, Romney has put the president on notice.  The battle for the soul of our country has been joined.